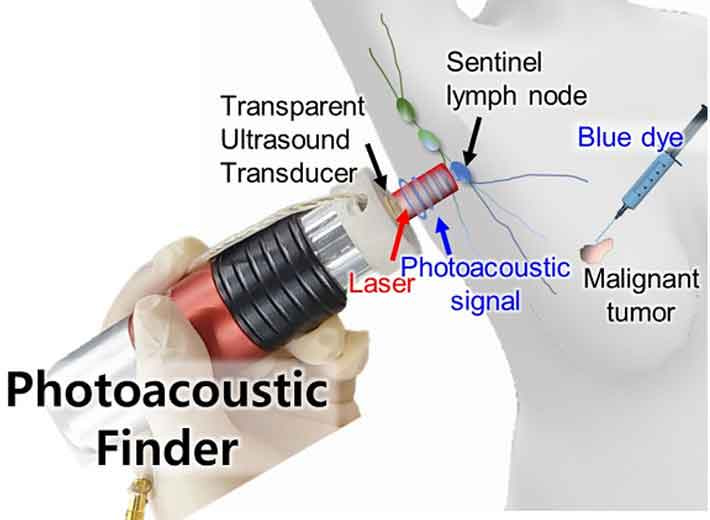 Massaging the higher arm is known to alleviate the body of swelling by stimulating the lymph nodes that process toxins in our body.

Cancers such as breast cancer and melanoma metastasize primarily via the lymphatic system, so knowing the condition of the lymph nodes is important in accessing the stage and prognosis of cancer.

Recently, a research team at Postech, South Korea, has developed a handheld photoacoustic finder that may examine lymph node conditions without radiation exposure.

In contrast to standard gamma probes, this non-radioactive PAF eliminates the chance of publicity to radiation and the necessity for particular services and permits repeated utilization which is cost-effective.

The findings from this study are published in Photoacoustics, an international journal ranked in the prime 0.78% in the field.

In general, sentinel lymph node (SLN) biopsy around the cancer is carried out to evaluate the metastasis in breast cancers and melanoma.

This is because the SLN is the first gateway for tumors to travel to the lymph nodes.

Nonetheless, since standard biopsies use radioisotopes to search out the SLN, patients and physicians are inevitably uncovered to radiation and the process requires a particular facility to access radioactive supplies.

To this, the research team coaxially aligned a spherically centered TUT (a tool that converts electrical signals into ultrasonic waves or receives ultrasonic waves into electrical indicators) with the solid-dye laser handpiece (a medical laser commonly used for skin treatment in dermatology).

A photoacoustic sign is generated when a laser is irradiated to a colored space and is detected by an ultrasonic transducer.

Nonetheless, utilizing the TUT technology acquired by the research team, a laser and an ultrasonic transducer are coaxially built-in into one small handpiece to simply detect photoacoustic signals.

Utilizing the photoacoustic finder, the researchers efficiently situated the SLN in the below arm of a mouse positioned below a hen breast after injecting blue dye into the mouse.

Besides, the photoacoustic finder additionally detected melanoma in a mouse subcutaneously injected with melanoma (malignant cancer) positioned below a hen breast, confirming that the finder can be utilized to detect colored malignant tumors.

“We believe the photoacoustic finder (PAF) system we now have proposed is the first transportable photoacoustic sensing tool for SNL localization,” stated Professor Chulhong Kim who led the study. “This analysis reveals a great potential to be useful in detecting SLN or melanoma without utilizing radioactive substances sooner or later.”

This study was performed with the support from the Primary Science Research Program and the National R&D Program of the National Research Foundation of Korea funded by the Ministry of Science and ICT, POSCO Project, and BK21 FOUR Project.