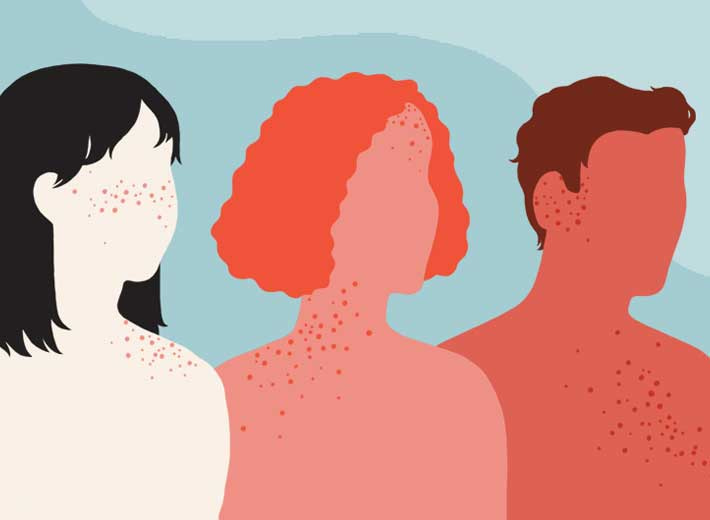 Deucravacitinib, a novel inhibitor of tyrosine kinase 2 (TYK2), continues to demonstrate sturdy efficacy and acceptable safety after 52 weeks of follow-up, according to late-breaking information from two pivotal trials introduced on the virtual annual congress of the European Academy of Dermatology and Venereology.

From benefit reported on the 2 co-primary endpoints previously reported at 16 weeks, longer follow-up confirmed additional gains out to 24 weeks after which persistent efficacy out to 52 weeks throughout these and multiple secondary endpoints, reported Richard Warren, MBChB, Ph.D., Professor of Dermatology and Therapeutics, University of Manchester (England).

“This could be a novel oral therapy and a vital treatment possibility for reasonable to severe psoriasis,” Dr. Warren contended.

Link between psoriasis and dementia has been examined

The multinational double-blind trials, called POETYK PSO-1 and PSO-2, enrolled 666 and 1,020 patients, respectively. The designs were comparable. Patients with moderate to severe plaque psoriasis were randomly assigned in a 2:1:1 ratio to deucravacitinib (6 mg once daily), placebo, or apremilast (Otezla; 30 mg twice every day). At 16 weeks, these on placebo have been switched to deucravacitinib.

By week 24, the proportion of deucravacitinib patients with a PASI 75 response had reached 69.3% and 58.7% in the POETYK PSO-1 and PSO-2 trials, respectively. The proportion of patients on apremilast with PASI 75 at this time point didn’t increase appreciably in a single study and fell modestly in the other.

By week 52, the response rates achieved with deucravacitinib at week 24 were typically unchanged and almost double those observed on apremilast.

The pattern of relative profit on the opposite coprimary endpoint, which was a rating of 0 or 1, signifying clear or almost clear skin on the static Physicians Global Assessment (sPGA), adopted the same pattern. At week 16, 53.6% of patients had achieved sPGA 0/1. This was considerably higher than that observed on both apremilast or placebo while this level of response was sustained through week 52.

When patients on placebo were switched to deucravacitinib at week 16, the PASI 75 response increased quickly. There was full catch-up by 32 weeks. In each group, a PASI 75 response rate of about 65% or higher was maintained for the remainder of the study.

On a prespecified analysis, prior therapy publicity was not related to any influence on the degree of response with deucravacitinib. This included a comparison between patients exposed to no prior biologic, one prior biologic, or two or more biologics, Dr. Warren reported.

Unlike patients in POETYK PSO-1, those with a PASI 75 response at 16 weeks in the POETYK PSO-2 trial were rerandomized to stay on deucravacitinib or switch to placebo. Designed to judge response sturdiness, this analysis confirmed a comparatively gradual decline in disease control.

“The median time to a lack of response was 12 weeks,” Dr. Warren said. He was referring to this case to the PASI 75 response. However, the slope of decline was comparable for the sPGA score of 0/1. At the end of 52 weeks, 31.3% of patients who had been re-randomized to placebo nonetheless maintained a PASI 75 whereas 80.4% of those who stayed on deucravacitinib nonetheless had PASI 75 clearance.

In the 52-week data from these two trials, some secondary endpoints have already been examined, and Dr. Warren said extra analyses are coming. So far, the pattern of response was similar for all endpoints.

Reporting on one, for instance, Dr. Warren said that sPGA 0/1 for scalp psoriasis was achieved at week 16 by 70.3% of these randomly assigned to deucravacitinib versus 17.4% of those in the placebo arm. Among these switched from placebo to deucravacitinib at 16 weeks, the scalp response had caught up to that observed in these initiated on deucravacitinib by week 28. The response was sustained out to 52 weeks in each team.

In the long-term trials, there have been no new safety considerations, according to Dr. Warren. He described this drug as “well-tolerated,” including that no important laboratory abnormalities have been noticed on long-term treatment. Even there was a trend for increased risk of viral infections, resembling herpes zoster, relative to apremilast, cases have so far been mild.

The Janus kinase inhibitor tofacitinib (Xeljanz, Xeljanz XR) has been approved for psoriatic arthritis, and quite a few other JAK inhibitors are actually in clinical trials for plaque psoriasis. These agents vary for their relative selectivity for JAK1, 2, and three kinases. However, deucravacitinib is the first JAK inhibitor to reach clinical trials that concentrate on TYK2, which inhibits interleukin-23 and different cytokines implicated in the pathogenesis of plaque psoriasis.

“Deucravacitinib could be very distinct from the opposite JAK inhibitors, and I feel we’re observing this in the clinical research,” Dr. Warren said. Because of responses in the POETYK PRO trials that rival those achieved with monoclonal antibodies, he expects this drug, if permitted, to be an important option for those with reasonable to severe disease preferring oral therapies.

Mark G. Lebwohl, MD, Professor of Dermatology and Dean for Clinical Therapeutics, Icahn School of Medicine at Mount Sinai, New York, shares this opinion. In an interview, he emphasized the distinctive mechanism of deucravacitinib and its clinical potential.

“After cyclosporine, which has many side effects, deucravacitinib is the best oral therapy we have now for psoriasis and one of many safest,” he added.